What to Expect If Accused of a Sex Crime

If you find yourself in the dreadful position of being falsely accused of committing a sex crime against a child or adult, knowing what might happen next can subdue fear of the unknown and give you time to prepare for certain situations. From the initial incident report to police to an arrest, the below information explores what might happen as the allegations unfold into legal action.

Please be aware that this content is for informational purposes only – it is not meant to influence your decisions as to what you should or not do. Decisions that are appropriate in one case might not be appropriate in another, and therefore should be discussed directly with your attorney.

Because most states have an expansive definition of what constitutes a mandated reporter, most individuals who learn that a child might have been sexually abused are required by law to report such conduct to a social service agency or to law enforcement. Therefore if the complainant (alleged victim) is a minor there is a high likelihood that the allegations will result, minimally, in a police investigation.

Furthermore, when a minor is the alleged victim of a sexual assault case, the minor’s parents or guardians do not have the authority to not “press charges” – this decision is left to the prosecuting attorney’s office.

If the complainant is an adult, he or she can decide whether to report the incident to police. Most often, prosecuting attorneys will not move forward with charges unless they know that the adult complainant will be cooperative throughout the process and will testify at trial, should one be required. 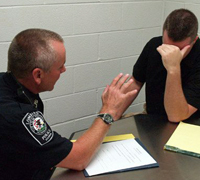 Upon receiving a complaint of an alleged sexual assault, police will conduct an initial investigation before filing charges and making an arrest. This investigation is conducted in order to find evidence as to whether the claims are legitimate. However, it might be conducted in a one-sided fashion in order to prevent the alleged perpetrator from knowing about it. Typically, the alleged perpetrator is contacted by law enforcement after they have concluded the initial investigation.

During the initial investigation, law enforcement will interview the complainant and document what he or she says. If the complainant is a child, police will interview the child’s parents or guardians and any “witnesses” they believe might have information regarding the complaint. They will also typically contact their local child social services unit and arrange for a “forensic interview.”  As testified to by social workers involved in a few of our cases, the purpose of such an interview is “information gathering” – the interviews are not meant to be probative. Therefore, the statements given by the child will usually remain uncontested until at trial. Such interviews are often recorded and used as “evidence” at trial.

Being Contacted by Law Enforcement

At some point in the investigation you will likely be contacted by local or federal law enforcement. They might come to your home, leave a voicemail for you, or just leave their business card at your front door. If they come to your residence, it’s common for them to downplay the accusations in an attempt to get you to discuss “your side of the story.” You might be told, “well, if you’re innocent then why not talk to us?,” or “things will go better for you if you speak with us.”

They might not even tell you what the allegations are unless you agree to speak with them. Remember, until you are “in custody,” you have no rights against self-incrimination. This means that law enforcement is not required to read to you the Miranda warning prior to asking you any questions. Anything that you say and do, or don’t say and don’t do can be used against you at trial.

Remember that you have a Constitutional right to remain silent. Inundated with fear and emotions, some individuals try to prove their innocence to the officer. They feel that if they are friendly to law enforcement and cooperate with the investigation, the case will go away. Please realize that even if you deny the allegations, you might lock yourself into statements that are inaccurate due to the stress of the situation. Consider first speaking with an attorney and following his or her guidance.

Being Asked About the Allegations by Friends and Family

Once friends and family members learn of the accusations they will likely ask you questions, and there will be a strong desire to try to explain your side of the story. Remember, you never really know who will ultimately help you, or hurt you. We have seen the serious consequences suffered by innocent people who were lured into saying the wrong thing to the wrong person. Regardless of how innocent you are, such statements can be misunderstood, misinterpreted, and inaccurately relayed to law enforcement. Be aware that any 3rd-party with whom you discuss the allegations can be subpoenaed to testify by the prosecution.

Also be aware that police may employ sting calls. You might receive a call from the complainant or a member of his or her family unexpectedly. These conversations can be recorded and used as evidence. Although some states require both parties to consent to such recordings, some have exceptions to this law for conversations involving alleged sexual crimes.

Being Charged and/or Arrested for a Sex Crime 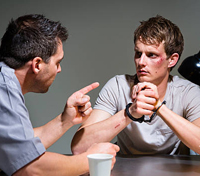 Once local or federal law enforcement believes they have enough evidence to justify an arrest warrant, they will submit this information to the prosecuting attorney’s office who will then decide whether to issue a warrant. It is not uncommon for many months to go by after the investigation before an arrest is made. If you have previously been contacted by law enforcement and subsequently contacted a defense attorney, chances are that your attorney will have reached out to law enforcement to assess the accusations. If so, police will sometimes contact your attorney and ask him or her to arrange for your surrender. If not, you will be arrested on site.

Facing an arrest for a sex crime that you did not commit is a shocking and emotionally devastating experience, especially when the complainant is a child. There is the humiliation of being taken into custody followed by the fear and confusion over what will happen to you next. It is in this distressed state that you are required to make some of the most important decisions of your life. If during or after this time you are given the opportunity to make statements, strongly consider only doing so at the advice of an attorney.

Final Thoughts for the Accused:

Remember, anyone can falsely accuse anyone of anything. The time to give your side of the story will come, but for now you should consult with an attorney. You do not want to make mistakes that can only make proving your innocence more difficult.

Attorney Tom Pavlinic and the Group’s local attorneys represent clients in sex crimes cases in states across the US. If you have been contacted by police, believe that you are under investigation, or simply believe that you are being accused please call 800-993-0632 or use our contact form. Our phone is answered 24 hours a day, 7 days a week.